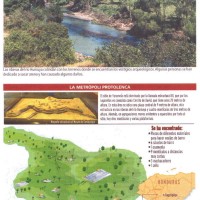 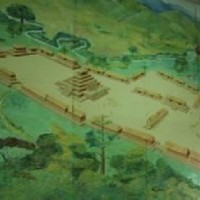 The ProtoLenca Indigenous folks who occupied most of Honduras but especially the Comayagua Valley where I live were a PreMayan group of people. Their civilization was not as sophisticated as the Maya but their main cultural site near Yarumela, which is a colonia of the La Paz Municipalidad, known as El Chircal was the epicenter for the Honduras Lenca people more than 3,000 years ago. The Honduras Institute of Anthropology and History confirms that there are fifteen covered mounds with stone structures underneath in an area encompassing 30 hectares, the largest structure 20 meters high and 7,000 square meters at its base; structures as noted in an artist rendition above. Numerous smaller stone structures have been verified as well. The only stone pyramid at present partially visible is the top of one near the river onto which I rode my horse in 2009. I also rode to the top of the highest covered mound known as “El Cerrito.” Within 10 kilometers of where I live is an unexplored archeological treasure. As a Historian I yearn to explore further. A scientific coordinated university effort could result in a national archeological park instilling pride similar to Las Ruinas de Copan, the southernmost Maya city-state and now an archeological park on Honduras’ nothern border.