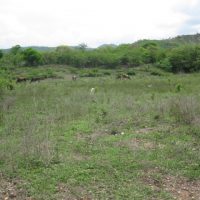 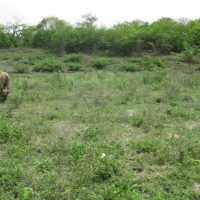 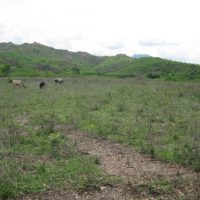 On a grassy plateau in the rolling foothills above La Paz lies a 42-acre plot of land where a friend was digging holes on his property to plant banana trees. The Valley of Comayagua is not known as the Valley of Rocks for nothing: the area where Mr X chose to dig, however, has a different type of soil. I reached down to pick up a handful of dark, moist earth similar to compost, loamy and soft. The gentleman thinks this area where he found the 1,500-year-old Lenca ollas was an ancient cemetery because he also unearthed human bones that were buried with the ollas. I have contacted a University of California anthropologist, she who dated the ollas, and she provided me with contact information for a Honduran archaeologist. We have communicated and I hope an arrangement can be made to initiate further government-sanctioned exploration of the site. In the foothills surrounding the plateau can be seen terraces carved into the hillsides indicating a possible ancient human settlement.